Cornell Cooperative Extension of Steuben County participated in the second annual FLXGives 24-hour giving day on November 13th with the hopes of raising a little bit of money for a new bathroom facility for the 4-H youth at the Steuben County Fairgrounds. They never expected to not only hit their ambitious $12,000 goal, but to actually more than double it.

The Community Foundation of Elmira, Corning and the Finger Lakes sponsor this generous day for nonprofits in Chemung, Schuyler, Steuben and Yates Counties. The friendly competition offers a cloud based platform for donors to donate to over 80 nonprofit projects. Individuals can create peer to peer fundraising pages for their favorite nonprofit’s causes. CCE-Steuben gathered 13 of these Fundraising Champions in their campaign who raised almost half of the nearly $27,000 funds for the day.

CCE Steuben also wishes to thank their two match challenge donors. Both the Steuben County 4-H & FFA Market Animal Sale Committee and an individual, Paul Griffen, of Livingston County, gave $2,000 challenge matches which were unlocked once the community raised that amount of money.

The project that CCE Steuben chose for FLXGives was a new accessible bathroom facility at the Steuben County Fairgrounds. The bathroom project has been envisioned for several years since 4-H’ers who work with their animals near the cow, sheep and horse barns must walk almost all the way across the fairgrounds to use the current 4-H bathroom and shower facility. The youth often spend several nights at the fairgrounds during fair time and also need to clean up when it is time to showcase their animals to the judges. The Livestock Sale Committee and a 4-H Memorial Committee has already raised nearly $13,000. CCE Steuben decided to pitch this project for FLXGives in order to push it over the top and make it a reality.

The community got busy and got involved more than a month ahead of the giving day. 4-H members created videos of themselves with their animals and explained how 4-H helps them grow confidence and business sense. The Fundraising Champions were busy sharing the social media posts and emails about the project. The CCE-Steuben board and staff rallied around the project and spent the day November 13th watching the goal thermometer rise online.  During their virtual Annual Meeting at 5:30 p.m. they were pleased to show that they had reached their $12,000 goal. But it did not stop there. Throughout the evening the Fundraising Champions never quit. At the stroke of midnight when giving online ceased, the project was over $25,000. And the next week, additional checks kept rolling in.

CCE Steuben was amazed that their project not only created the funding for the bathroom facility, but they took the top of the leaderboard from about 82 organizations in the four counties who were also raising money for their projects.  Staff and board members are humbled at the support the community has shown for their hard working 4-H members. 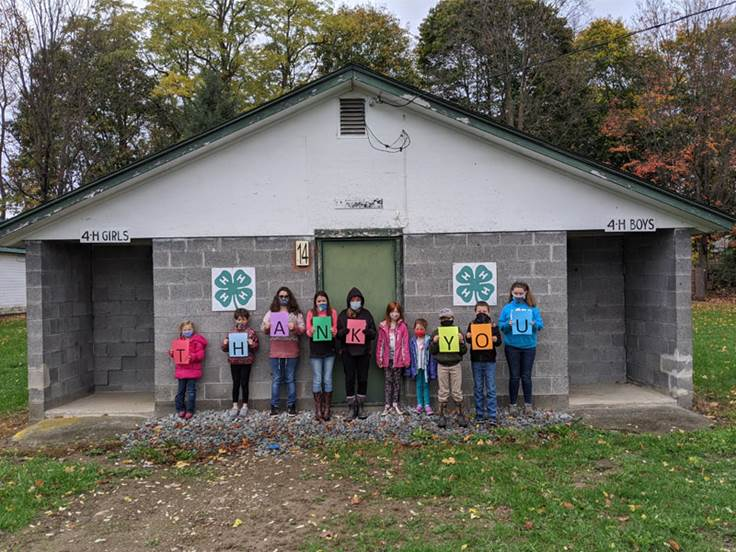