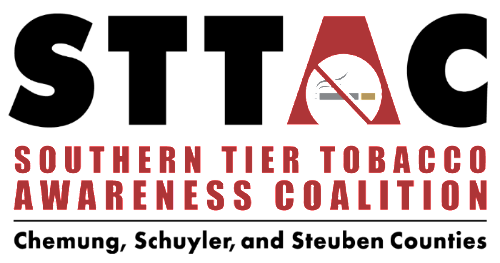 JOIN US FOR THESE LOCAL EVENTS! 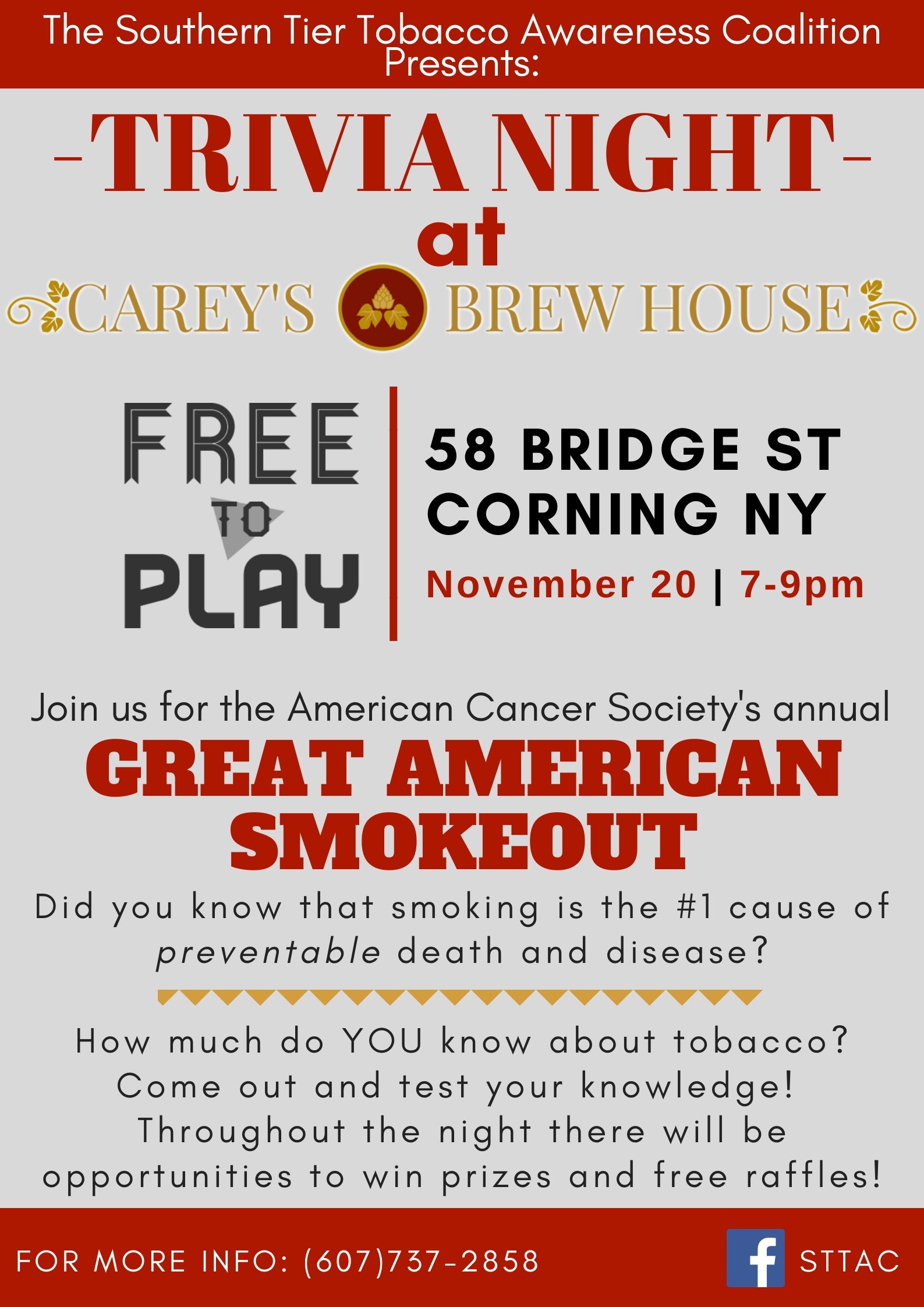 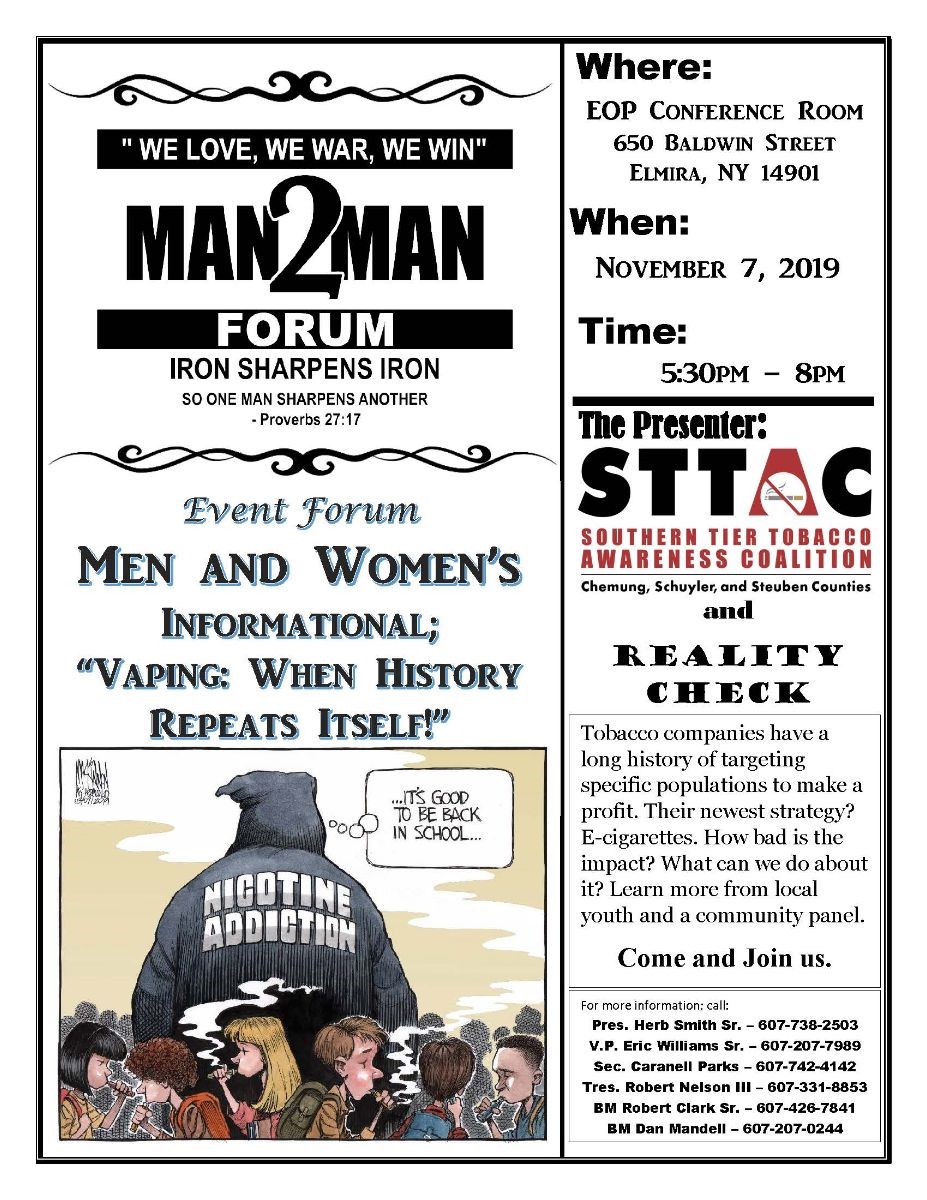 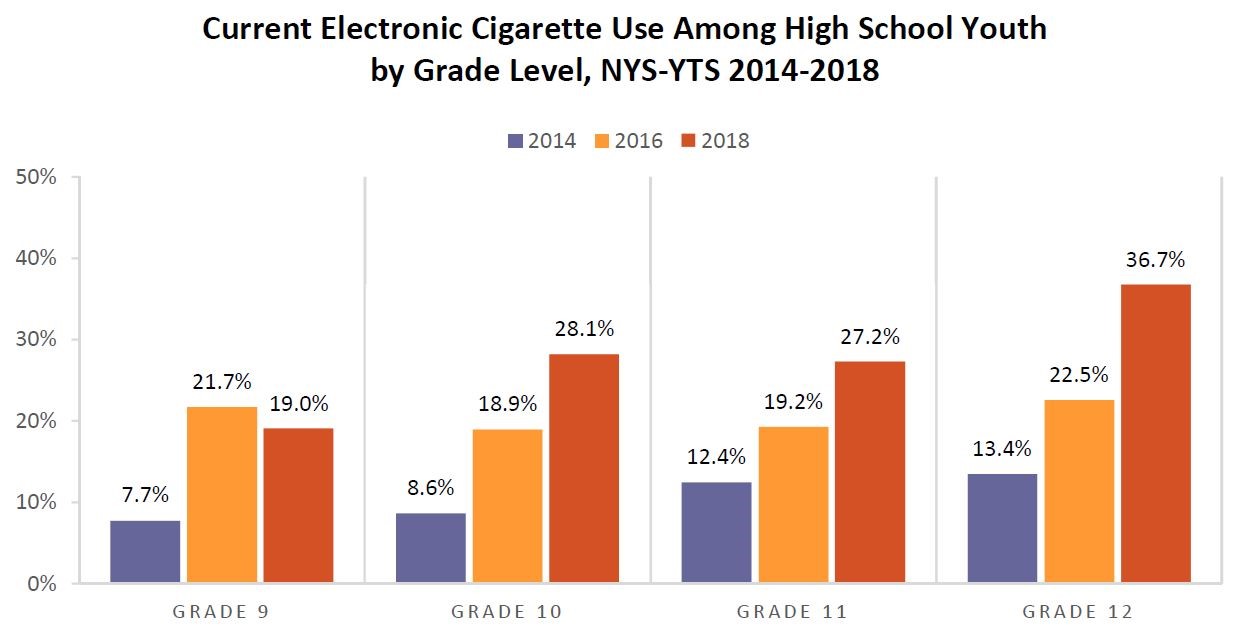 In September 2018, the U.S. Food and Drug Administration declared youth use of electronic cigarettes to be a national epidemic. According to data from the 2018 New York State Youth Tobacco Survey (NYS ‐YTS), over 27% of high school students report current use of electronic cigarettes (e‐cigarettes) and similar devices, a 160% increase from the 2014 prevalence of 10.4%. Additional analyses indicate that among high school students in New York:

• E‐cigarette use increased significantly between 2014 and 2018 among students in every grade level.

Preventing youth initiation of all tobacco products, including e‐cigarettes, is a priority of the NYS Tobacco Control Program. Almost all e‐cigarettes contain nicotine, a highly addictive drug derived from tobacco that can have lasting effects on brain and cognitive development. With or without nicotine, e‐cigarettes are not hazard‐free and e‐cigarette aerosol may contain heavy metals, volatile organic compounds, ultrafine  particles, and other toxins linked to lung disease. E‐cigarette use can undermine established tobacco‐free norms and increase the risk of ever using combustible tobacco cigarettes among youth and young adults. 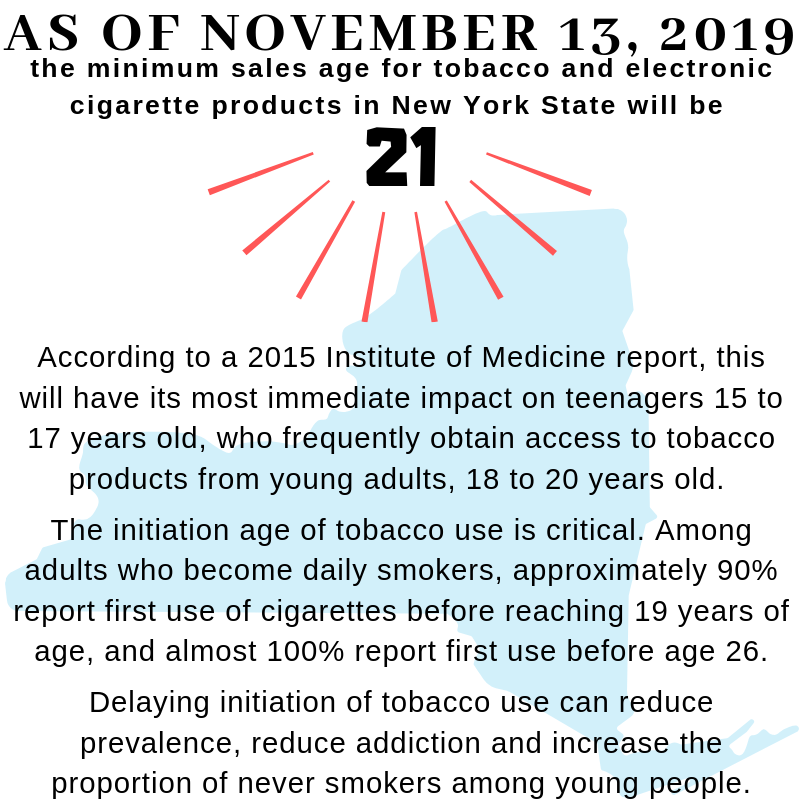 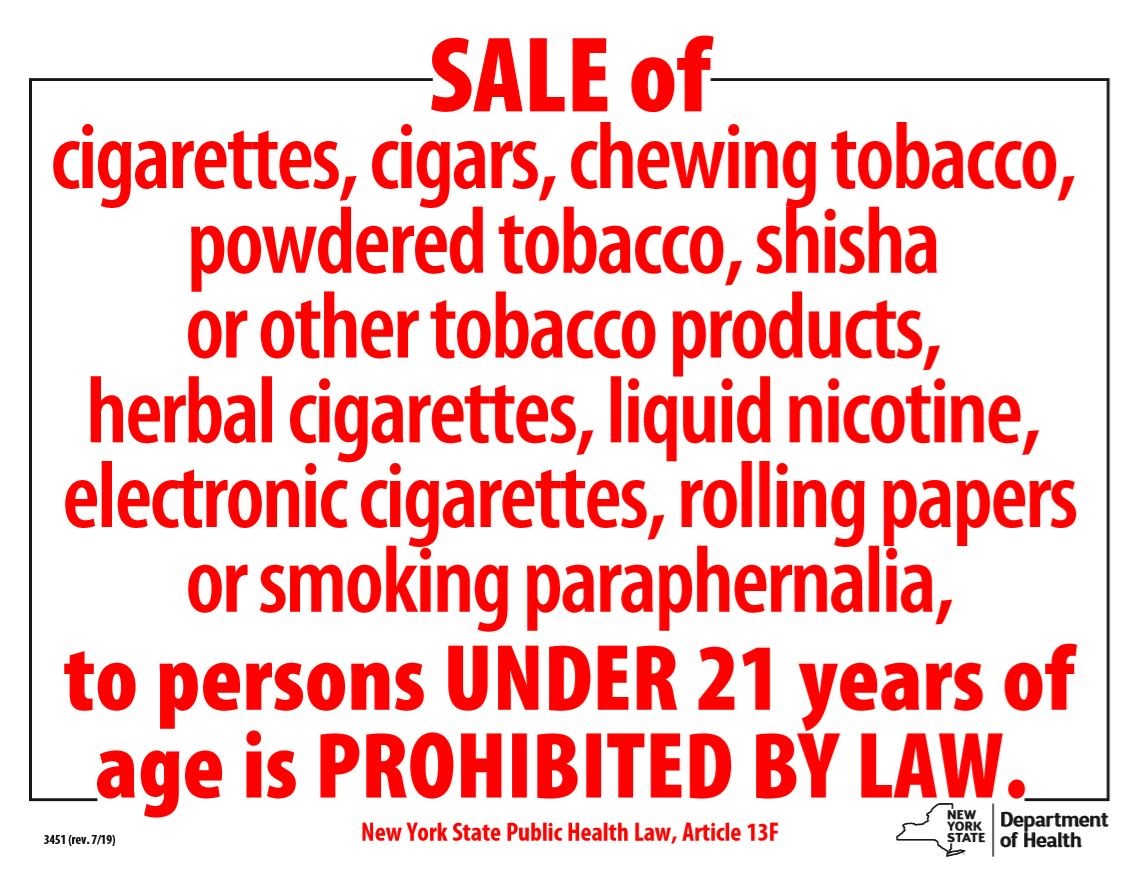 Join us for a Neighborhood Conversation

Hey Schuyler County, have you been impacted by tobacco products (including e-cigarettes) or know someone who has?

STTAC, Schuyler County Public Health, and Schuyler County Coalition on Underage Drinking and Drugs are partnering up to host two “Neighborhood Conversations.” Join the conversation to help us understand how tobacco is impacting you, your family, and your community.

To thank you for your time, we’re providing a meal and a chance to win a raffle basket. Interested? Call 607-737-2858 to register. 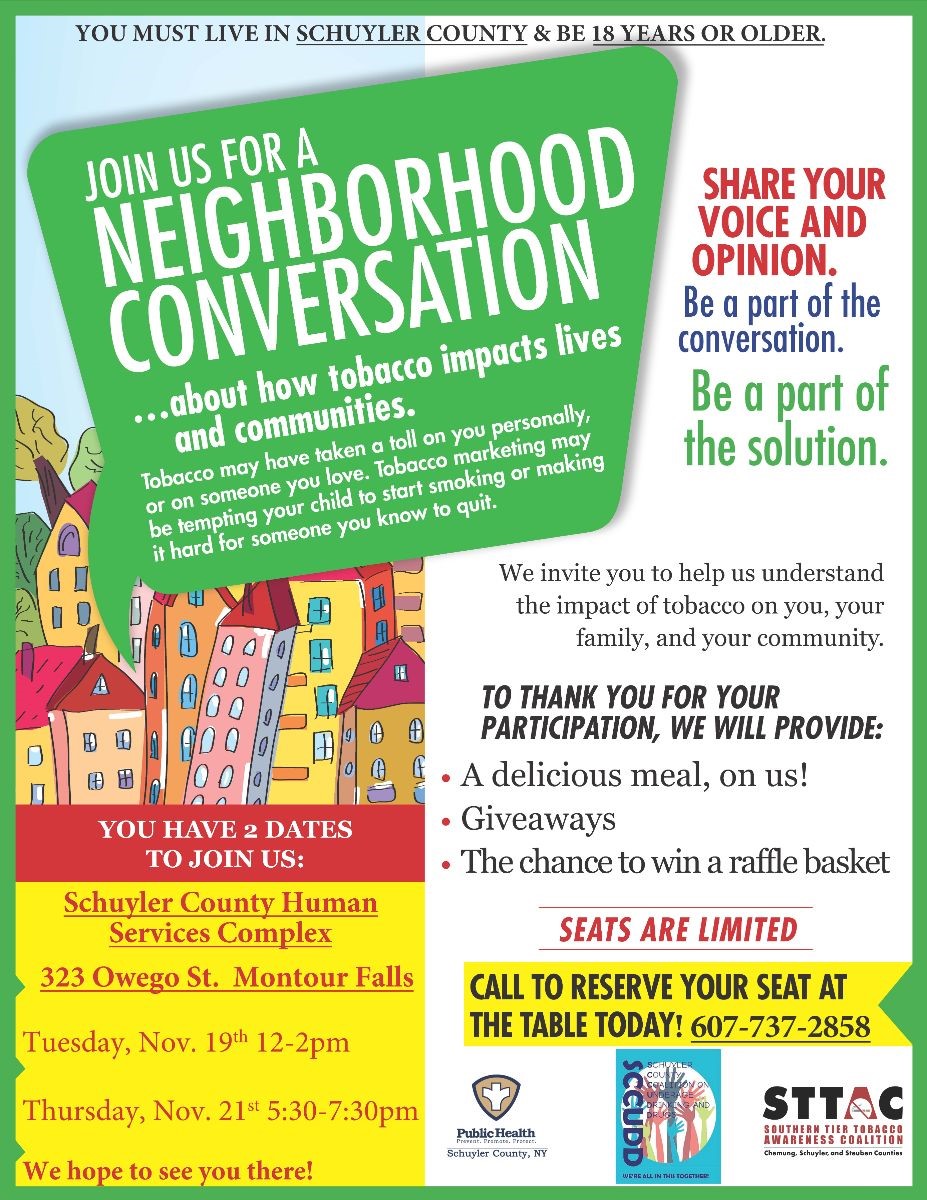 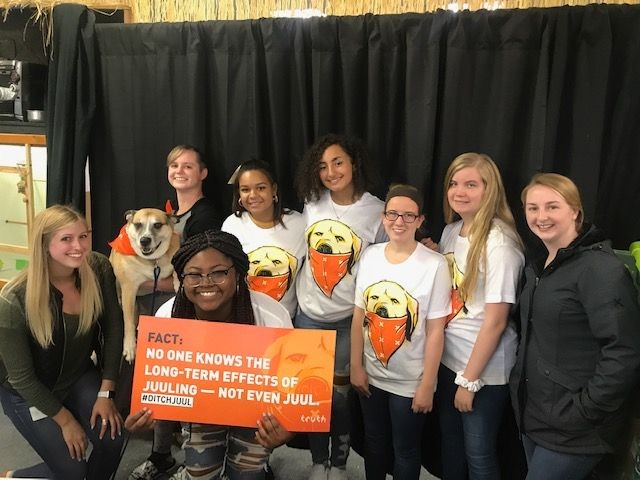 Reality Check declares that it is time to #DitchJuul! Reality Check youth and their furry friends spoke out against the tobacco and e-cigarette companies on October 9th. Local teens joined youth from across the country to commemorate National Day of Action (NDOA) hosted by the Truth Campaign. The theme for NDOA was animals against human testing- since nobody know’s the long-term effects of using e-cigarettes. The event took place in the form of a social media takeover, nationwide. The goal was to create an inescapable campaign urging Big Tobacco and e-cigarette companies to take responsibility for their actions.

At meetings, we jumped into the retail environment at the Point of Sale. Some of our youth even helped teach the other teens about these concepts. It was great to have some peer-to-peer education happening. We also talked about leadership and empowerment and what they mean to us. We can use these skills to lift others up and create the first tobacco-free generation!

Reality Check youth are leaders among their peers and positive change agents in our community. If you know of any youth in Chemung, Schuyler, or Steuben counties who would be interested in participating in this free youth leadership program, contact Samantha White at (607)737-2858 or spwhite@chemungcountyny.gov.